What it Cost: COPD Diagnosis

It's been forever since I blogged about my own horse.  Or you know, blogged in general.  But I am back to working full time and then some, so pony time has been limited.  Mollie literally could not care less.


Mollie is almost 3 weeks post-prednisone treatment and is (knock on wood) doing really well!! She gets a little huffy under saddle but as long as she gets plenty of walk breaks she seems ok.  I put her back on the Freeway from Hilton Herbs and I'm hoping that can maintain her through the cooler months, and then we'll have to make a plan come next spring/summer depending on how she presents.

A little while back someone (maybe Beka?) did a "What it Cost" post to break down the costs of a vet visit.  I figured I hadn't read one on COPD before, so it would be a devastatingly sad fun topic for a post.  The total cost wasn't QUITE so bad because it was broken down over a couple of payments (I paid for the bottles of prednisone as needed) but it still is a lot of money that I tend not to think about unless I actually blog about it.

So to recap, I made an emergency vet call because of respiratory distress.  The vet did a visual assessment, a lung wash, set the samples out to the lab, and then I bought 2.5 bottles of prednisone.

This is how it all breaks down:

*yay for 2 other people who decided they needed the vet that day too!!
**a total of 1,250 tablets

So there ya have it.  A little over $700 for an entire COPD diagnosis and treatment.  Luckily Mollie requires vet visits very infrequently (knock on wood!) so this should keep her healthy for a while ;)

Montana's dad was away this weekend so I got more ride time on the big red man :)

Lessons with Montana and D have been going well.  After the last time I rode D had a not so awesome ride on Montana, so we've changed our lesson format a bit.  I get on Montana first, find out what kind of "mood" he's in, and toddle around for a few minutes to either set the tone or give him a little attitude adjustment.  Then D gets on and we get on with our lesson.  It's been working out well and I've been making sure to find places to end on a good note.

When I rode Montana this weekend he was great, but I do realize I really need some help with the guy.  For D he's been good, and with me he's been good too, but I'm not really sure where to go next with him.  Since the last time I truly brought along a green horse was Mollie, and that took around 10 years, I'd like this time to be a bit better :) So I've called in a woman I used to ride with frequently, and whom I love, and will hopefully be taking a lesson on him at the end of this week.

Now I'll leave you with a really long video, I apologize it's from the trusted iPhone and not an actual camera.  I'll bullet some note worthy moments below, incase you don't want to watch all 5 and a half minutes of the wild thing.


0:00-0:30: Montana has SUCH a hard time trotting through the back left corner of the ring without pacing/cantering.
0:30-0:35: Proof that he CAN actually trot through that corner.... it's just so hard.
0:45ish seconds: I swear he is not lame.... just awkward and clumsy.  Also, trotting circles to the right is the hardest.
1:00: Mild Montana Meltdown
1:50: Major Montana Meltdown
2:09-3:00: Oh just a black screen because I don't know what happened and am too lazy to fix things.
3:19: I ACTUALLY ASKED FOR A CANTER TRANSITION AND GOT IT
3:40: We still can't circle right
4:00-4:05: So when we DO circle right Montana just leans into my right leg so mother-effing hard.  So then I push back and he responds with the weird butt/tail swish thing.  He's trying.
4:10: But we can circle left!!
Posted by Alicia at 1:25 PM 3 comments:

So I don't know if I touched upon this at the end of last year or not, but at the end of the last school year, my position at work was eliminated.  I've spent the summer applying for jobs and going on interviews but as of right now I am substitute teaching, and am kind of ok with it.

When I don't get called to work I get to ride my horse in the morning.  It's glorious.  Even on days like today when she's a total punk but then makes up for it by being a good girl on the trails.  The fact that she was chaperoning her boyfriend may have had something to do with it...

A few different bloggers have talked about trail riding recently, and for me it has always been a stress reliever.  Mollie tends to be "on alert" when in the woods, but not naughty.  She stops and gawks at things that could potentially attack her "herd", but is quiet and walks on the buckle in between those moments.  She definitely prefers trails to ring work, and I've gotten to see many different places between her two spotted ears.

This past weekend I went to visit a bunch of old barn friends, and watch the Rhode Island Equitation Championships.  I never really showed in the Equitation, and certainly not at this level, but the barn I boarded Mollie at prior to the current one hosts the finals every year, so I like visiting.  Plus, pretty ponies, and long satin.

I was going to post all about the show, but I got super creepy stalker-esque at the end and figured I'd share that little story with you.

While watching the juniors, most of my friends were rooting for HJ, a girl who I don't even know aside from attending shows and hearing her name.  She started riding way back in the day at Heritage (my old barn/host of the finals) as a lead line/short stirrup kid.  Since then she's continued riding, mostly with her mother and brother as mentors.  From the outside looking in, this kid hasn't had it "made", has worked for everything, and is very deserving.  Her brother, who also began riding at Heritage, won the RI final a few years back, so HJ was the obvious crowd favorite.

Going into the test she was sitting in 3rd.  The test was straightforward, with a trot fence and hand gallop thrown in, and everyone got to work.  I don't claim to know a ton about the big eq, but needless to say people gasped at HJ's test.  I have never seen someone make such a ballsy decision, and ride it SO WELL in my life.  From the trot fence, riders were to go around a perpendicular fence, and then canter up the next one, essentially making a roll back.  HJ unexpectedly sliced the trot fence, made a seemingly impossible inside turn to the canter fence, and literally had two strides between her landing and take off spots.  DAMN GIRL.  She then proceeded to hand gallop the right way (not some lame ass extended canter) down to her final fence.

I don't think anyone was displeased that she won :)

The best part of the whole thing, and the reason I am a total stalker, is the next part though.  I had to leave right after the ribbons were given, and ended up walking to my car right behind HJ and her brother.  Listening to them chat was easily the best part of my day.  He was SO proud of his little sister it was evident, and she just kept saying, "Can you believe it?  We BOTH won it.  Can you believe it?!"

Then I fangirled and took a creepy photo, because creep. 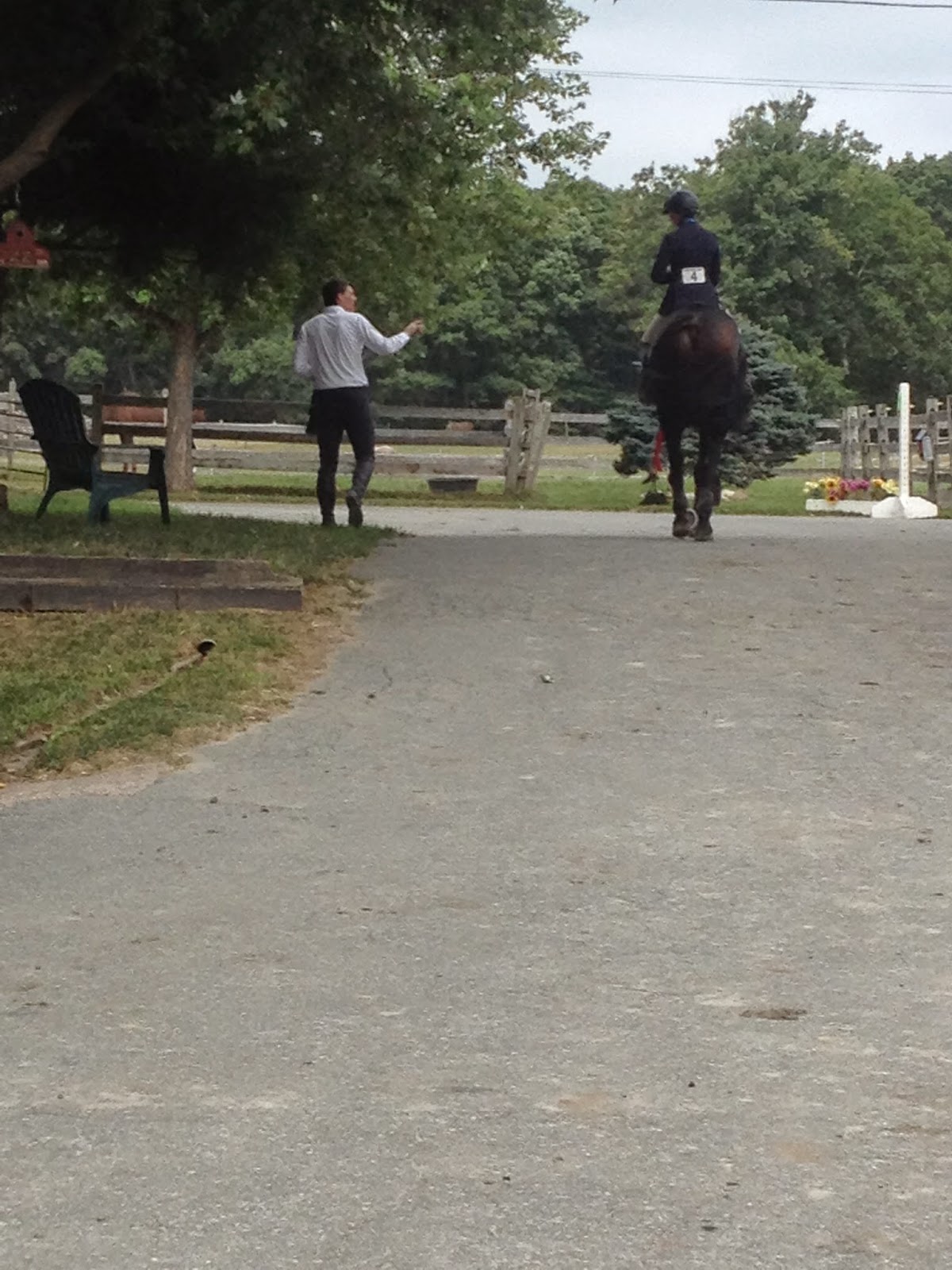