In the last week I think I rode my horse more than I did the entire month of October.  While things aren't perfect at the new barn (more on that later... princess Molls is NOT adjusting to the new feeding schedule) I have absolutely loved having her so close to home.  Another nice perk is that I can frequently drag my sister to the barn with me, and then force her into taking videos :)  While I can't promise the next 6 minutes of watching my horse trot around on the flat will be the most riveting part of your day, they'll probably be more interesting than whatever work you're supposed to be doing!

I have to say, I'm really pleased with where Mollie is right now.  I didn't ride much all of October, and rides the month prior were pretty hit or miss.  Since being at the new barn I've been riding her in the snaffle, just because I really didn't think she was fit enough to go in her double, but she's definitely ready to go back.  While warm up still is, and probably always will be a little slow, she's been getting really nice by the end of our ride.  If you skip to minute 5 of the video you can see what I mean.  She was so incredibly soft in my hand, and when I remembered to stretch UP (why is that so hard?!) she did the same.  She was actually picking her legs up instead of dragging them along, and the little bit of "hop" in her stride you see on the last long side is what I strive for.  This little horse isn't built for this work at all, but it's so good for her and she tries her heart out for me.  Can't ask for any more than that.


Enjoy some random commentary from my 14 year old sister, or turn down your volume.  Either way :)
Posted by Alicia at 7:22 PM 2 comments:

Mollie is settling into the new barn pretty well.  I'll have to take photos and do a barn tour post soon but for now here are some pictures of Molls being cute. 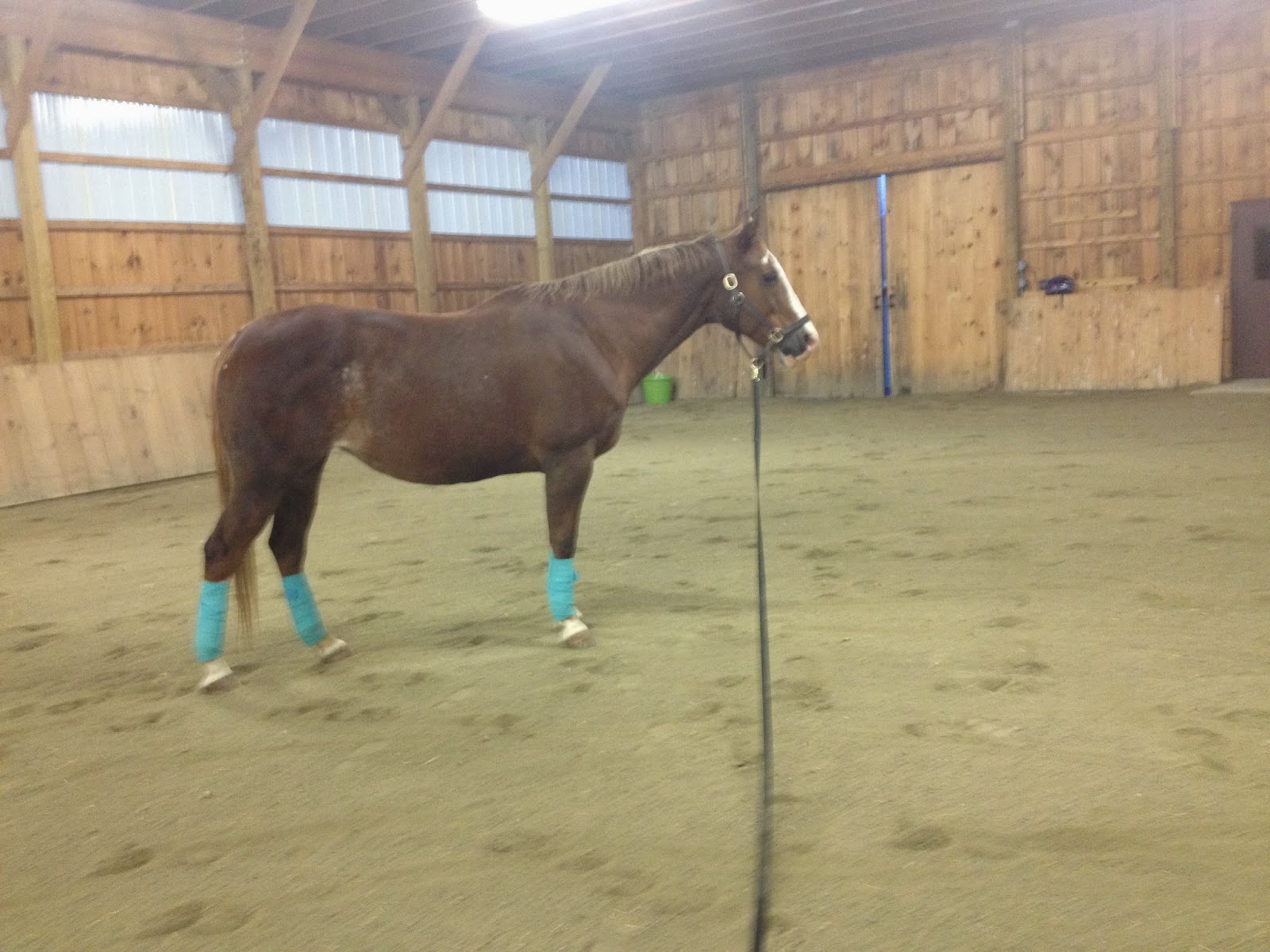 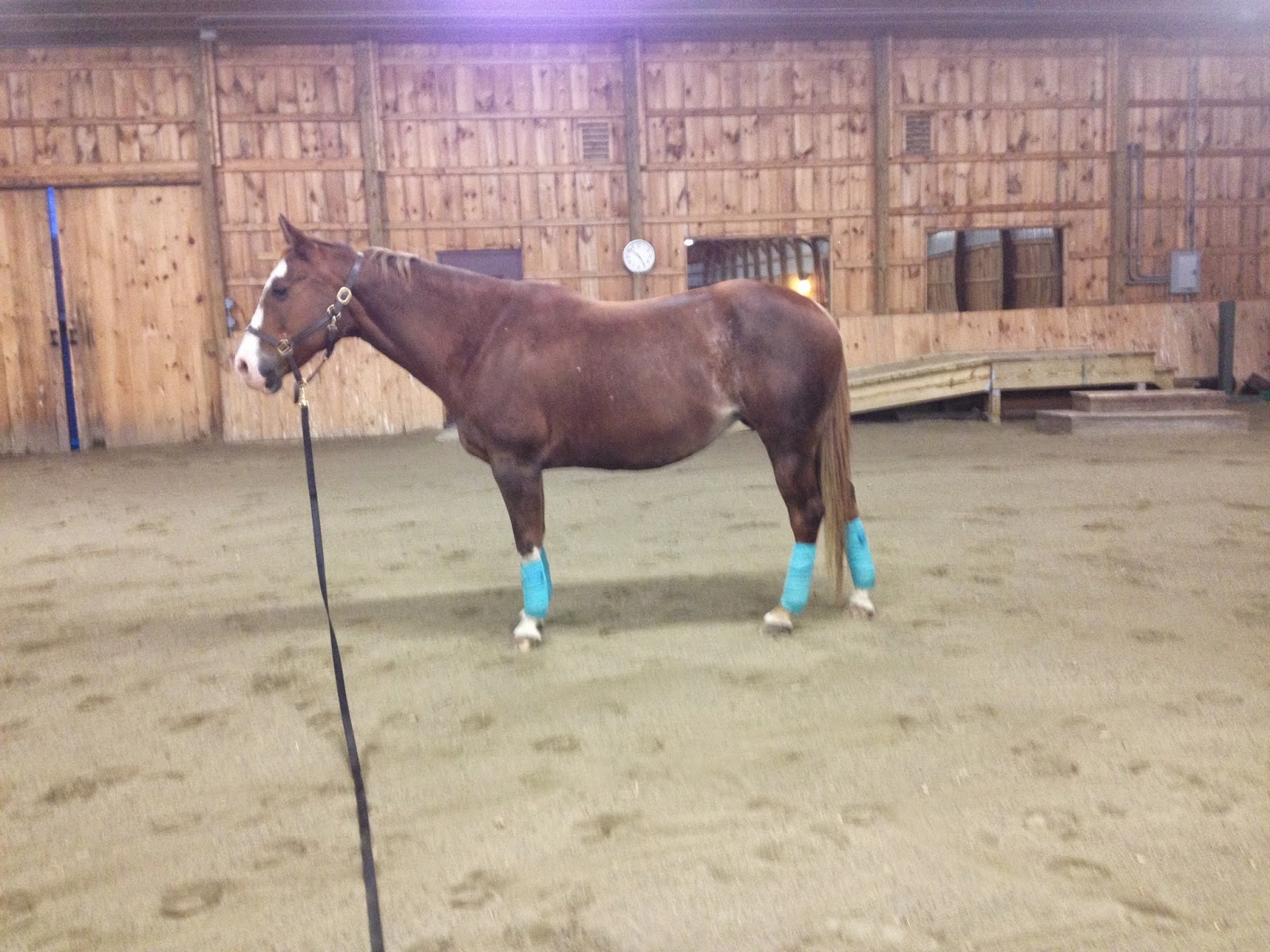 It cracks me up that she ALWAYS halts like this, no matter what.  Front legs totally square, left hind a hair in front of the right.  Silly horse.


One thing that is different here is that Mollie ALWAYS meets me at the fence.  I really do think she is a little bored here.... hopefully she'll adjust because for right now she is where she is.  In the meantime it's nice to think she's actually happy to see me, because usually she doesn't acknowledge me until I walk out to her. 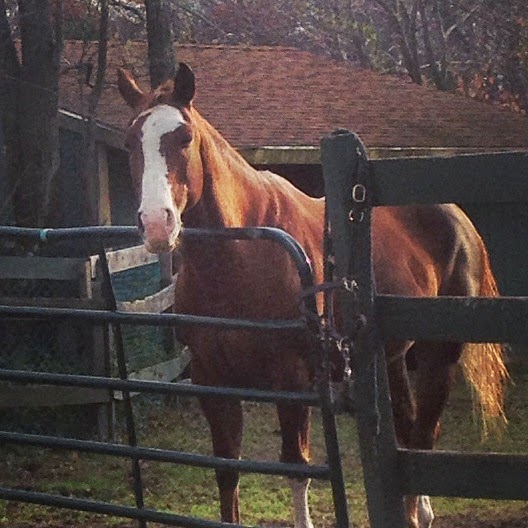 So I've been putting off this post because I wanted to take nice pictures of everything I bought at EA, but that just isn't happening, so you're getting a post with janky-ass pictures.  Sorry.

Equine Affaire has been an event that I look forward to and attend ever since I was a little girl.  I refer to it as "Horsey-Con" to non horse people, and it truly is a sort of equine mecca.  There are years I have gone and bought absolutely nothing, because the deals can be hit or miss, but there is something about being in a place that is absolutely brimming with other horse people that draws me there time and time again.

For those of you that aren't familiar, Equine Affaire truly is a horse convention of sorts.  There are clinics, breed demonstrations, demo rides, and vendors representing every single facet of the horse world.  From high end tack shops to farming equipment, you'd be hard pressed to need something that WASN'T there.

I almost always go with a friend, C, and this was also the first year I brought my 14 year old sister, who also rides.  It's safe to say we were way more excited to show her everything than she was to even go :)

I definitely walked away with more than I have in previous years, but I didn't even spend $120!! I was pretty proud of myself and definitely scored some awesome deals.  The haul included...

A zebra print turnout sheet.  Mollie didn't even need one, but it's zebra print and was only $19.99.  Done deal.  Side note, Mollie had a perfectly good turn out sheet but chose to tear it to shreds the day after I purchased this one.  Clearly she knew there was another in the wings.


Like some fellow bloggers I was very excited to stop by the Mango Bay booth!!  Pam could not have been nicer and was surprised (pleasantly, I hope!) at how many people recognized her belts from blog-land.  The belt that I wanted was no longer available in my size, but Pam heard me commenting to C, and immediately told me to grab any one off the hook and she would cut it down to size.  So nice!!


Other purchases included a pair of no-name breeches for a whopping $15.  Again, no photo because they're already in the wash but they fit well, have pink knee patches, and did I mention they were $15?  I also picked up two halters for some of the ponies at the lesson barn, then it was off to watch the David O'Connor clinic.

Most of the clinicians at EA post what they are looking to do in each clinic, and then local riders can apply and be selected to participate in the clinic, which is way cool in my opinion.  This year however, David O'Connor did things a little differently.  He brought 3 riders with him that train in his program year round, to really show "what he does" each day.  I was a little disappointed at first, but he was right in saying that some of the clinics there turn into dealing with a horse's nervousness because of the venue (it is overwhelming).  And I will admit, it was pretty cool to see some "up and coming" grand prix, four star riders.

The clinic didn't disappoint, and I did like most of what he had to stay but we didn't stay for the entirety of the clinic.

All in all it was another very successful EA in the books and I already can't wait for next year.

Girl's Still Got It

Taking a quick second to brag about my horse.

She's had 12 days off and hasn't jumped in about a year and a half.  Maybe two years.  And then today we did this.

I recognize it's a video of me trotting my 17 year old horse over baby cross rails, but god she's a good girl.  I decided to not really steer or do anything about finding a distance because I'm pretty useless, yet she popped over anything I sort of pointed her at and landed on the correct lead about 99% of the time.

Also, lets all enjoy that first line, where Molls swerved left and right all in the course of 1.5 strides.
Posted by Alicia at 1:34 PM 3 comments:

So Mollsie has a new house.  I didn't really plan on moving her, but a few small things happened that added up to "it makes sense to move the horse".  And my commute time from my house to the barn just went from 50 minutes to 5.  Definite score.

More details to come, but here are some photos of Mollie in her new digs.  Sorry they're almost exclusively of her butt...