For all the times I have fallen off of a horse it is absolutely miraculous that I have not suffered any serious injuries. (commence crazily knocking on wood as I type this).  I have had a few tumbles that scored me a nice scrape or bruise, but nothing too crazy aside from a broken tailbone.  I was in seventh grade and riding Mollie outdoors.  She tripped, got pissed (tripping is offensive), and bucked.  I tumbled over her right shoulder, flipped, landed sitting down, and broke my tailbone.  Of course there's not much to do about this so I sat on one butt cheek and winced every time I sneezed or laughed for the next few weeks.  Or months or years.  It felt like forever.

Another notable fall was a few years back, I remember being in college but I'm not sure what year I was.  I was riding a HUGE (and I'm not just saying that because I'm small.... he was a giant) TB at a barn I kept Mollie at and out of no where he let out a bronco style buck.  Now I've sat my fair share of bolts, bucks, and spooks but never in my life have I been launched out of the saddle like Sir Teddy did.  I can only describe it to being launched out of a cannon... not that I've done that, but it had to be similar.  I landed on my knees, immediately stood up, and both knees buckled and I just fell down again.  For several seconds I was certain I broke my patellas.  I have never been in so much pain related to a fall and literally had bruises on both knees from March-June.  All I have as evidence from this fall is a photo of me covered in dirt, literally clinging to a jump standard because I couldn't get up.


My last "fun" fall was during the summer in 2012.  I taught summer camp at the barn and usually rode before camp because it was way too hot to do so afterwards.  I was hacking Mollie out in a back field and was almost done with my ride.  Coming out of the back field was a narrow stretch of grass in between the paddock fence line and a small stone wall that separated the property from the road.  I was cantering Mollie in the field and figured I'd let her canter down the stretch for a bit before walking back to the barn.  She had a different plan.  She bolted as soon as she saw the straight away and no amount of me hauling on her face (not my prettiest moment, but it was an emergency) was stopping her.  This wouldn't have been a huge issue except at the end of that "stretch" was a 90 degree turn, thanks to a tree planted at the end.  Despite my valiant efforts Mollie didn't stop and we plowed right. through. the. tree.  I seriously remember branches breaking off on my face.  Thanks ass-horse. 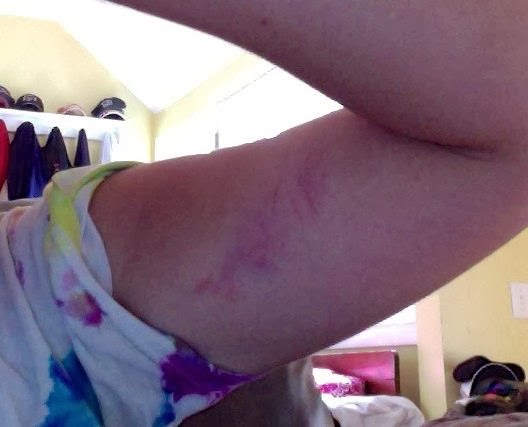 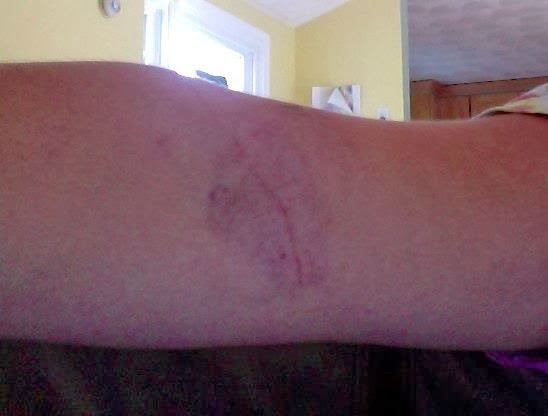 The best part of this fall was that I fell off in front of her (through the tree) and she then proceeded to knock me in the back of the head with a hoof, and step on my shoulder.  Thank god for always wearing a helmet or I would likely be dead.  My shoulder was bruised but the only good photos I have are the ones above of my scratched up arms.  Guess I did some tree trimming with those too.